The Federal Capital Territory Administration (FCTA) has suspended the processing and issuance of building plan approvals for Lugbe and all on-going developments in the district.

The Director, Department of Development Control, Mukhtar Galadima, made the disclosure in a statement issued to journalists on Sunday in Abuja.

Mr Galadima explained that the suspension had become necessary due to the ongoing harmonisation of developments in the district with the Abuja Master Plan.

He decried the current state of illegal developments in Lugbe, saying that there was a myriad of contraventions, including arbitrary change of land use, among others, which must be corrected.

“This is to inform the general public that the Department of Development Control, Abuja Metropolitan Management Council, is not granting building plan approval for developments in Lugbe due to the ongoing harmonisation exercise of the district, in line with the Abuja Master Plan.
“Consequently, any developer found to be developing any property within Lugbe district without the requisite building approvals from the department is doing so at his or her own risk.
“The department will enforce appropriate sanctions, in accordance with the provisions of the law, including demolition of such illegal properties,” Galadima said.

He urged the public to be guided and ensure compliance in order to avoid relevant sanctions.

The director also advised developers to stop illegal conversion of approved buildings to other uses, especially from residential to commercial use.

He ordered the defaulters to immediately reverse such abuses or face demolition of such properties.

The Director, Planning, Zalihau Ahmed, explained that the harmonisation process had reached the second stage, having completed the first stage.

She further disclosed that many factors were responsible for the completion of the project, including payment, which she said was hampered by the COVID-19.

Ms Ahmed warned developers in the area to stop work because the federal government had already designated Lugbe district a ‘planning area’. 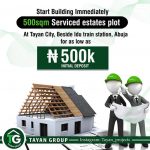 What is Tenement Rate?

Owning a home is a keystone of wealth… both financial affluence and emotional security.